Sometimes I meet people who have one of those stories that just stops you in your tracks. One that makes you marvel at their strength, mourn for people you’ve never met, and rejoice when love wins. This is one of those stories. I asked Sam (the mama) to tell it in her own words, so here it is:

“Paisley became a very fussy baby when she was approximately 30 hours old. We tried everything and took her to her pediatrician many times and couldn’t figure out what was causing her to cry so much. She even saw a gastro specialist. When she was 4 weeks old she developed a couple lumps. 2 weeks later I would learn those lumps were the 1 st visible symptoms of a diagnosis that would forever change my life.
On January 23, 2014 at only 6 weeks, thinking she may have a bowel blockage, I packed a few bottles and headed to the Pediatric ER. Less than 7 hours later, I would learn that Paisley had leukemia. Blood Cancer. I did not know then that babies got cancer. A few hours later we were moved upstairs to the Pediatric Oncology Unit. Where I would later realize that this unit is where she would spend almost every day for the rest of her life.
Within the 1 st 24 hours of diagnosis, Paisley had had surgery to place a chemo port, have a bone marrow aspiration, spinal tap and receive her very 1 st dose of chemo straight into her spine. 24 hours later we would confirm the diagnosis of Infant Acute Lymphoblastic Leukemia. Her bone marrow was so full of leukemia that her marrow was no longer producing any other kind of blood cells except for leukemia ones. The “Infant” on her diagnosis comes because she was less than 365 days old. 3 weeks later, the pathology results came back with the worst diagnosis possible. Paisley’s leukemia had the least successful location for the abnormality on the DNA line of the leukemia cells AND the MLL-R Gene (Mixed Lineage Leukemia Rearrangement Gene). Having the MLL-R Gene means that the leukemic cells show tendencies of having both types of leukemia, ALL as well as AML (acute myelocytic leukemia). She basically had two types of leukemia at the same time. Leukemia cells were also present in her spinal fluid. These results significantly lowered her survival rate. She was given a 10% chance of survival. Chemo was very rough on Paisley but she responded very well to treatment. After the 1 st 6 weeks of chemo, another bone marrow aspiration and spinal tap, results showed “NED, no evidence of disease”. She was in remission! She would continue to do well on chemo even in spite of the side effects and many visits to the Pediatric ICU unit for complications to either the chemo or the side effects of the chemo. There were a couple times where she was really sick and I didn’t realize how close to losing her I could have been.
In October, she became very sick and we had to stop chemo until her body was able to recover. She was on a 3 week chemo hold. A few days before Thanksgiving in 2014, we learned she relapsed. Her leukemia was back. She was still in what they consider “active treatment”. She was getting chemo regularly. She started on a new protocol and her oncologists began looking for bone marrow donors for transplant. After quite a bit of time and some worry that a donor may not be found, one was finally found. Her donor was a 9/10 match! The gentleman agreed to be a donor and transplant was scheduled. 4 weeks later, Paisley was once again back into remission.. In January, she again relapsed. We were going to proceed with transplant since the number of leukemia cells were still low. February 2015, the leukemia count would rise. In March, a bone marrow aspiration and spinal tap would show that her leukemia counts were still rising. She was not responding to chemo anymore and her bone marrow transplant was cancelled. Our only hope for a cure was now gone.
I learned later in March of a clinical trial on the other side of the country that was doing a new trial specifically for Infant ALL. After her oncologists spoke with the Executive Oncologist at the other hospital and sent medical records to Seattle, Paisley was accepted into the trial! Paisley just needed to gain weight to meet the weight requirements and get into remission. I once again had hope!!!

The problem was she wasn’t responding to any chemo or drugs they were giving her. Not even one she received as a drip that ran for 24 hours a day for 28 days. Nothing was working. Paisley was hooked up to continuous feeds through and NG tube and she was gaining weight. The medical flight to Seattle from Florida was approved and we kept working on finding something to lower her leukemia counts. At this point her bone marrow was 100% leukemia cells and her blood labs taken from her blood showed 90% leukemia. If she didn’t respond to chemo she would be gone within a couple weeks. She then received a chemo combo that had always worked. One of the hardest chemo combinations. Within 48 hours there was no leukemia present in her lab results!
One of the side effects of chemo is that it not only kills the leukemia cells but also the good cells. The chemo killed her good cells and she ended up with 2 blood infections. On April 28 th , around 6am, Paisley was transferred once again to the Pediatric ICU unit. She was in full blown septic shock. Over the next few days she would go back and forth from getting better to sliding backwards. On May 2 nd , Paisley would go into surgery to remove one of the infected lines. She would come out and back into the PICU room on a ventilator. She would never come off the ventilator again. But just the night before she was sitting up in the crib playing with me and her night nurse. I didn’t know at the time that this was the last time I would see her smile, see her reach for me, hear her laugh, or feel her rubbing my face as I rocked her back to sleep.
She would remain the ventilator. On May 4, 2015, I woke up to nurses and staff around Paisley’s crib. I would shortly learn her organs were starting to shut down. Just after noon that day, her heart would begin to shut down. I was now in that situation where we are now preparing for her death. She would be gone before I would go back to sleep.”

After Paisley’s passing and the long mourning period that followed, Sam knew her family still wasn’t finished. When she became pregnant with Amira, she battled constant fear and anxiety that this baby too would be ill. However, she was blessed with a healthy pregnancy and now a healthy little one! She named her Amira, since she’s Sam’s miracle! I took these images of Amira at nearly 4 months old and she was an angel for her session.

A rainbow baby is a baby that is born following a miscarriage, stillbirth, neonatal death or infant loss. Sam ordered this rainbow outfit especially for Amira, in remembrance of Paisley. Thank you for taking the time to read their story, and if you decide to donate to the Childhood Leukemia Foundation, please do so in honor of Paisley. Amira, we’re so grateful you’re here and for the joy you bring your mama! You’ve got a beautiful guardian angel who will always be watching over you. 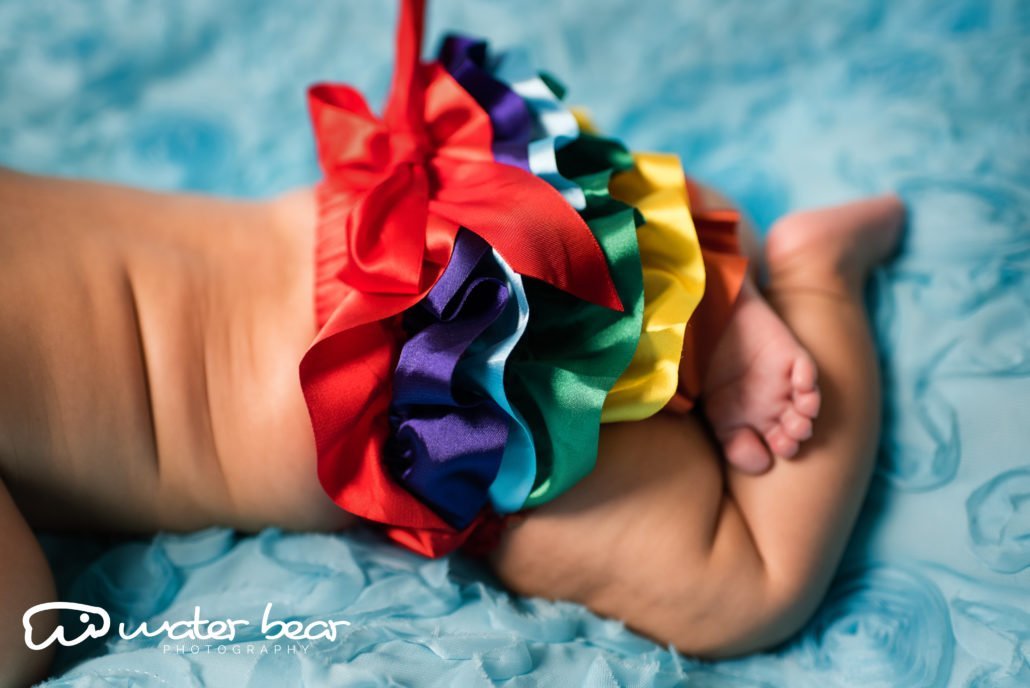 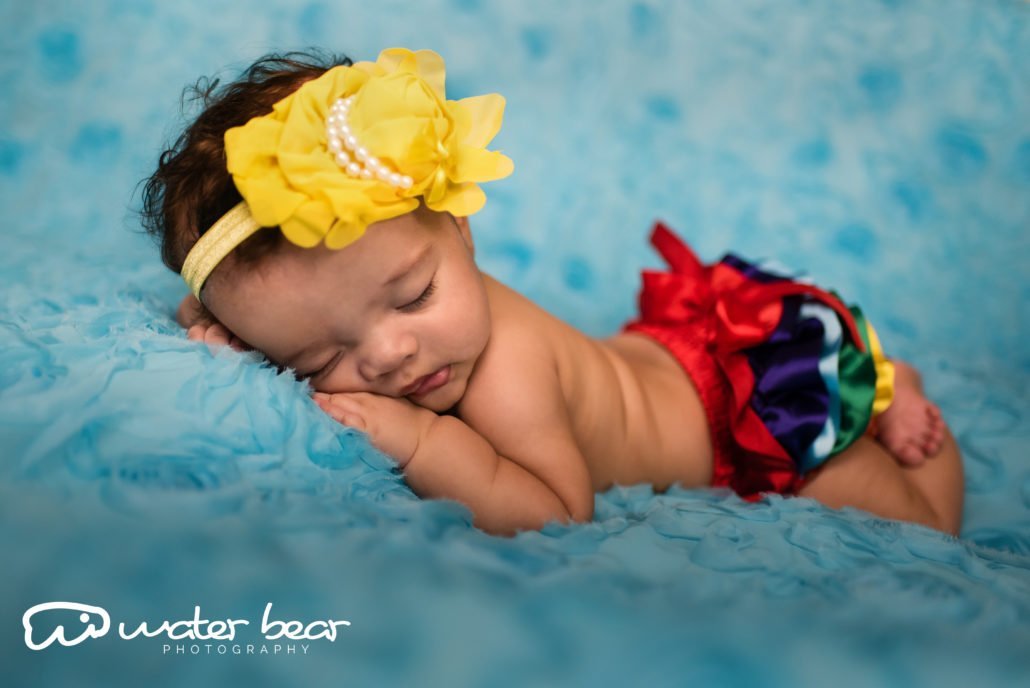